When Austin McMillan and Jason Ramos first met, they never expected their relationship to evolve from partners to business partners in A Hot Sauce Company.

For some, quarantine was a year of self-reflection, exploration and keeping busy enough to not think about what was going on.

Ramos spent some time in Thailand over the last two years for work, and wanted “to recreate some of those spices, that flavor “ from his travels during quarantine. The two bought “different peppers and species we typically wouldn’t buy,” resulting in so many leftover peppers, that they decided to make their own hot sauce to “see how it goes.”

Last summer, they tinkered with versions of their original sauce, drawing influences from McMillan’s South Carolina childhood and Ramos’ experience growing up in his family’s restaurant, giving them a chance to explore and experiment with something new “when there wasn’t much to do.”

After falling in love with their first original sauce, McMillan remembered how they were having a Beyonce moment when they “started taking it places with us” to barbecues and dinners, and with the extended praise of friends and family, they decided to start selling it to see what happened.

Ramos described wanting to “make sauce for the average consumer…we want people to love it and use it with multiple meals..to create unpretentious sauces for everybody — ”versatile for marinating, mixing, dipping and scooping.” McMillan joked about the amount of scrutiny and care they take when making decisions on everything from choosing their peppers to “the fonts on their labels… to how much vinegar or salt to put in the sauce.” 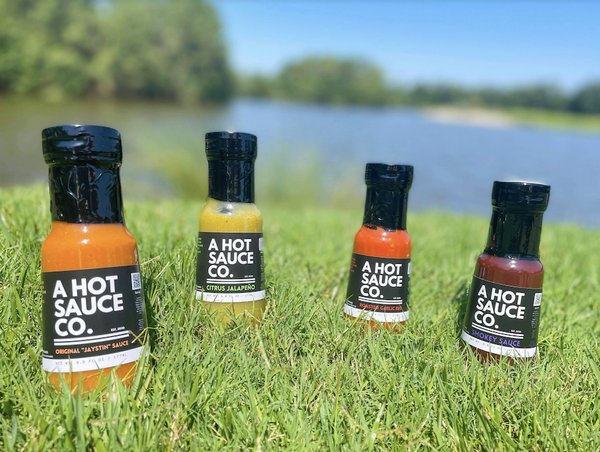 A variety of sauces from A Hot Sauce Co.

“We built it from the ground up, just the two of us,” from the marketing, website building, blending the sauces in their kitchen, “making the freshest sauces in a microbatch with the highest quality ingredients.” “When you eat it, we want you to say, ‘That’s flavorful,’”described McMillan, with no melt-your-face-off ghost peppers in sight.

Each of their four sauces has “a slightly different taste in every bottle” depending on the uniqueness of every pepper. Their original “Jaystin,” started as a joke when their friends started calling the sauce they carried with them different mash-ups of their own names. A blend of red habanero and serrano, garlic, red onion, lime, and seasoning, it’s the hottest of four sauces with “a back heat, which allows you to eat the food while still enjoying it with lots of flavor.”

Their Citrus Jalapeno is deemed “a hot sauce for people who don’t like hot sauce,” with gutted jalapenos and a citrus back, great for eggs, fish and salsa. It was a labor of love as well as trial and error, being originally much hotter until bringing it to Austin’s family slash “taste guinea pig,” where a love for hot skipped a generation –“If I (Ramos) can make a sauce that is flavorful, has some heat and that his family will eat, I know I succeed.”

Their Roasted Garlic is a classic taste on a red Tabasco or Crystal hot sauce, with garlic dry-roasted in a cast iron skillet and a peppery finish. Their Smoky sauce, the newest addition, is flying off the digital shelves, influenced by Ramos’ travels through the Southwest, and made with smoked peppers and gradual heat.

The first in-person event was held at Del Ray Pizzeria for their biannual “Wing Ding Festival ” in May 2021, sampling and selling their sauces to put their name out there. Currently, they are partnered with a Twitch-based trivia night where their sauces and merchandise are prizes for winners.

“For a small, gay-owned business and us being partners, we want to support the community and good local businesses that support those same things. We are an e-commerce business that wants to grow and develop locally and foster one-on-one relations,” explained Ramos.

Growth has felt very organic for A Hot Sauce Co., they said, and they intend to allow the business to take whatever course feels necessary, whether that means staying a local hot sauce company or a nationally sold brand. In addition to expanding relations with other local restaurants, McMillan and Ramos hope to one day sell their products in stores and local farmer’s markets, as well as being involved in local pride events.

“The brakes are off…and it is our hot sauce baby…so the sky’s the limit,” McMillan said. “When people would be at each other’s [throats] during the pandemic, we found something to do together that brought us even closer together…there is a lot of love and passion here, and we hope that when people taste it…they know this is home grown love, and they that can feel it as well.”

This site uses Akismet to reduce spam. Learn how your comment data is processed.